According to recent reports from Jon Heyman, All star pitcher and racist/homophobic tweeter, Josh Hader is still a child at the age of 24. 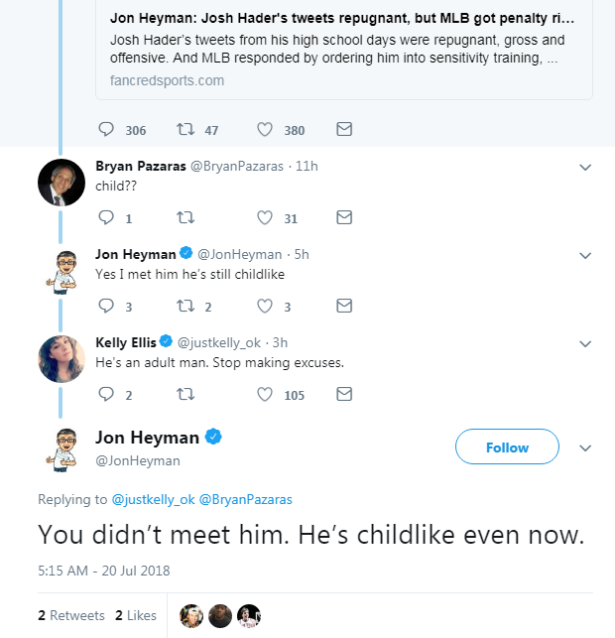 Now despite the speculation of him still being a child, the legal age of an adult in Wisconsin is 18 years old. For people with geographic issues, that’s the state where he pitches! He is 24 years old!  It’s the “He gives a good quote and access so he must be a good kid” kind of defense that Heyman has taken here.

When Hader posted those tweets at the age of 17 he wasn’t a child. At least not according to the United States criminal justice system. At the age of 17 you can be prosecuted as an adult insofar as criminal charges result. Many states take the position that 17 year old individuals are so close to adulthood, that they accorded most of the responsibilities of adults with those privileges.

So no Jon Heyman, your boy is not a child. Majority of 17 year olds are smart enough not to post the N word, KKK, White power and homophobic comments on the internet. It’s common sense.

Before the All-Star game, Jon Heyman made a big deal about Josh Hader being the "nicest" player. Then all of Hader's awful tweets were discovered.

Heyman is now on Day 4 of fighting with people about Hader, and has taken to just repeating how "childlike" a 24-year-old adult is. pic.twitter.com/vsebsqLPGT