On this weeks “Ask The Fans” I asked Mets twitter what they thought about having a DH in the National League.

Talk of the DH started in the ERA when Babe Ruth played. However momentum of the DH did not arise until the 60s, where pitching was at its dominate form. In 1968, Denny McLain won 31 games and Bob Gibson had a 1.12 ERA. Carl Yastrzemski led the American League in hitting with a .301 average. After the season, the rules were changed to lower the mound from 15 to 10 inches. They also changed the strike zone from the top of a batter’s shoulders to his armpits. All this was done to make pitching less dominate and to have a more offensive type of game.

On January 11, 1973, American League owners voted 8–4 to approve the designated hitter for a three-year trial run. Then on April 6th, 1973 the DH was created for American league teams only. Ron Blomberg of the New York Yankees became the first designated hitter in Major League Baseball history, facing Boston Red Sox.

I researched the pro’s and cons of having a DH based on facts and opinions from baseball analysts: 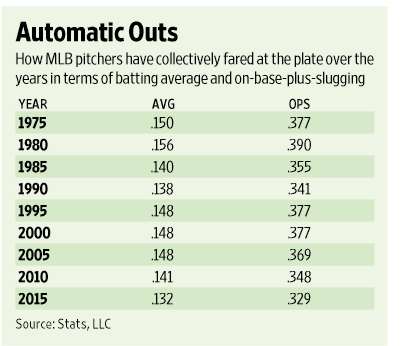 Ask the Fans question of the week: Should the NL adopt the DH? Yes or no and why? If Yes then how would it benefit the Mets?

Here is what our writers had to say:

@thatmetschick: For me it’s a yes and no. The cons balance out the pros. The Mets have like 4 guys on their roster who can just DH so it would definitely help them however I like the traditional aspect of the game. If pitchers field then they should hit. They should learn how to hit from a young age whether it be high school and college and then they should continue that into the minor leagues. If they have to hit in the minor’s than they have to eliminate the DH in the minors as well. A pitcher being able to rake the ball would make the decision easier for the manager to keep him in the game rather then pinch hit for him and risk going to the bullpen. I think it would be more exciting to see a pitcher be able to hit and pitch. The more athleticism a player has, the better the game will be.  (Otani, Bumgarner)

@MarissaMets: I feel as if I don’t have a strong opinion on this…I used to be SO for the DH because I thought there really was no downside to it but hearing people’s “no-DH” explanations I understand the downside.

@MetsGal : Let me be the first to say, FUCK THE DH. I believe that if a pitcher plays, he should bat. It’s an important part of the game.

@ChristinaMets15 : DH– it’s garbage. If you play on the diamond, you should he batting. Pitchers getting hits, regardless of rarity, is still one of the most enjoyable selfcontained exciting aspects of baseball. It probably would help the Mets if they were a well constructed baseball team whose pitchers didnt have better averages than some of their “batters.”

@LBarer32: Not only should the DH be abolished from the American League, it should be eradicated across all levels of baseball. Minors, college, high school, all of it. Pitchers get to the Major Leagues and they can’t hit because they’re not required to once they get to high school. If you start encouraging pitchers to be complete players, there will be more pitchers like Madison Bumgarner, Jake Arrieta, et al who can actually swing the bat. The DH is one of the worst things ever to happen to the game of baseball. It inhibits strategy making it easier for AL managers. You want another good hitter in the lineup? Well make him learn a position. The DH (at younger ages) is preventing big slow guys from learning a good first base by letting their coach say, “it’s fine, he can DH.” On the other side of the coin, instead of having a pitcher take swings in the cage, he’s prevented from doing that because his coach says, “Why? We’re just going to DH for you.” The designated hitter should not exist anywhere at any level. If you’re too lazy to work hard and become a more complete player, baseball isn’t right for you.

@ernestdove: Yes. End the foolish purity of the game crap. Not with seeing 4 infielders on 1 side of the infield and catchers with Quarterback sheets on their wrists. Get over it people. If theres any pitchers who can hit above .180 they’re welcome to be in lineup at DH. Alonso anyone?

@MetsDaddy2013 : In my lifetime, I’ve had to see Rey Ordonez and Juan Lagares not only play truly transcendent defense, I’ve also had to see them be almost completely inept at the plate. If there’s no DH for that, why should there be one for the 2-3 times a pitcher actually has to hit?

@ReyBrutal : Yes. And anyone who has ever said “you can’t walk the opposing” feels the same way whether they know it or not. Pitcher offense is inordinately bad. There’s nothing like it looked at as a whole. It would benefit the Mets to play Céspedes and Alonso DH as well.

@metsnark: I’ve never liked the DH but now pitchers spend years in pro ball without ever batting. Face Scherzer or DeGrom when the last time they faced live pitching was high school? Seems ridiculous. Like sending your kicker out to play running back for a few plays.

@DJNYified: No. Because when I’m called an “old baseball crank” I dig my heels in harder. Like the DH? Go play beer league softball. They have designated runners & 4 outfielders, so the unathletic players who pull two hammies while running 90 feet can play too.

@Smoove_Vic : I dont think so. There’s so much more strategy involved with the P hitting, especially late games with double switches, defensive substitutions, lineups etc. The P doesn’t have to be an automatic out. Bumgarner, even Zack Wheeler prove that a competent hitting pitcher is possible.

@WigsZone: Never. The game of baseball is you hit and you play your defensive position. If you are bad at one, its on you to get better at it. The rules should not be changed to fit a set of players lack of skill. Same idea as playing a great defensive fielder who can’t hit. Anyone who is in support of the DH because “they don’t want to see bad hitters hit” should also in theory be in support of 9 designated fielders and 9 unique designated hitters (don’t give them any idea.

@DevilDawg36: Yes, it’s time the NL adopts the DH. The DH is at every level of baseball. With the amount of money invested into these pitchers, why have these pitchers risk injury doing something they may not have done since HS?

@jack_hendon99: Yes. Eliminates the incessant double switches/pinch-hit fiascos like with Herrera/Blevins weeks ago (where manager decisions > players). Negates pitcher AB’s that are statistically proven to be less competitive (for both pitchers and the ump). Also pitchers won’t get hurt batting. Matz won’t bust a finger while bunting. Callaway wouldn’t have to find reasons to pinch-hit Reyes/Kelly and keep them in the game to stretch out or spell a pitcher. Also gives the players the chance to dictate the outcome, which is more important than managerial decisions.

@andrewmusic21: I always hated the DH, but I do believe it is better for the game. Too many injuries with pitchers hitting and running, and gets another hitter in the lineup. I do feel however rosters should expand to 27. Playing shorthanded and bullpen usage changed the way game is played. Actually, here’s a better idea. Have a 28 man roster, and 25 are eligible per game. That way SP can be left off roster that games they rest in, and can add extra RP and bench. Keeps flexibility without AAA shuttle back and forth for DL.

@jessicabrooke5: I don’t think the DH should be in the NL but at the same time, the Mets probably won’t spend money on an actual DH anyway so it can’t hurt our current situation. Only pro to the DH in the NL is that IF David Wright comes back, he can ride out into the sunset with some glory.

The debate for the DH in the NL will continue until it actually is enforced. You witness a pitcher gets hurt while swinging the bat or running on the bases, then there will be a cry for a DH. You witness a base hit or home-run by a pitcher and then youll have people screaming for no DH. People are always going to have their opinions about whether or not we continue to change Americas past time or keep it the same. It’s up to the commissioner to make the decision.