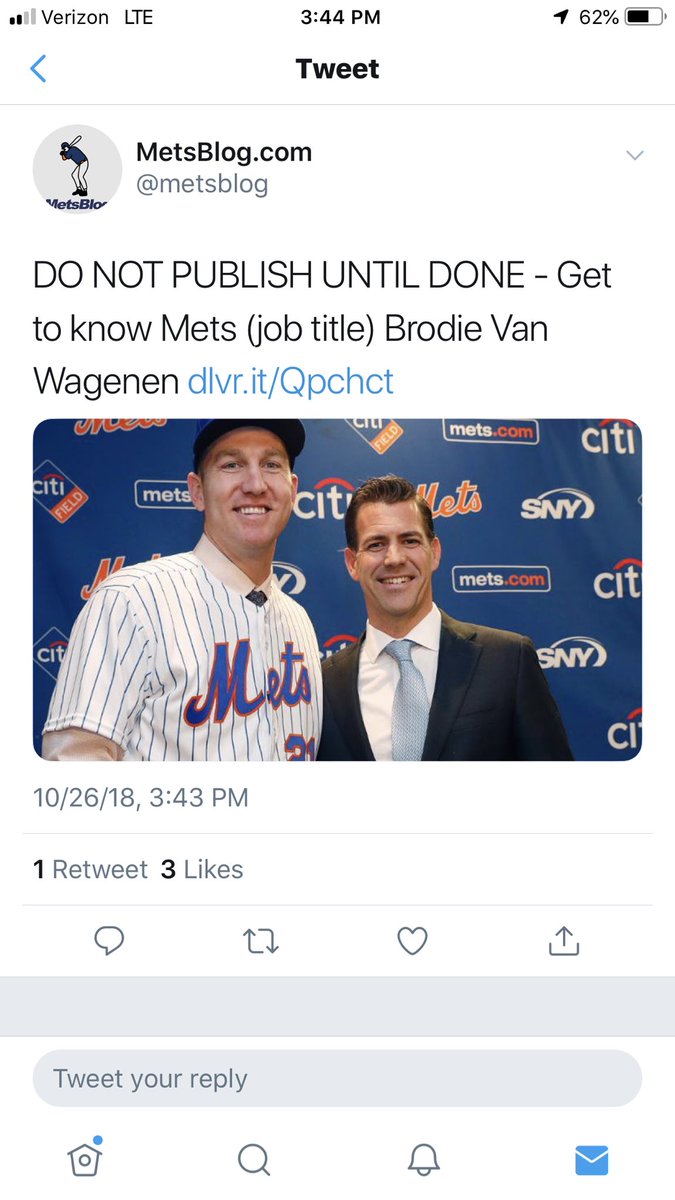 Here’s what you need to know about Van Wagenen and my perspective on the hire.

Who is Brodie Van Wagenen?

Van Wagenen, 44, is a high-profile player agent with CAA, where he is also the co-head of their baseball division. He also represents Jacob deGrom, Noah Syndergaard, Yoenis Cespedes and Tim Tebow, among others.

In July, Van Wagenen was quite clear making public comments that his client, deGrom, was worthy of receiving a long-term contract extension from the Mets. He also negotiated the current $100 million deal signed by Cespedes.

Van Wagenen is respected around baseball for his professionalism, class, intelligence and love of baseball, though he has never worked in a baseball operations department.

“I believe baseball is better when the Mets are competitive and successful,” Van Wagenen said in a statement after interviewing with Fred and Jeff Wilpon on Monday. “That success is better for the fans, players, and the economy of the sport,”. “The players, fans and entire organization will be motivated to have a leader with the skills and commitment to win. If the Wilpons believe I am that person, we will have that conversation.”

Van Wagenen, whose father-in-law was the late astronaut Neil Armstrong, received a baseball scholarship from Stanford University, where he graduated with a degree in Communications.

In 2012, Sports Business Journal named him among the 40 best young talents in sports business.

My Take: I like this choice. I don’t love it, mostly because it’s risky. But, if Van Wagenen works out over the long-term, it will mean the Mets are doing well and charting new ground, and the prospect of both is exciting.

This decision will surprise people that assume it is unprecedented. However, as we speak, the Lakers currently have former NBA agent Rob Pelinka as their GM, and not too long ago the Tigers and Warriors did the same.

Despite other teams going this route, it’s probably not the direction I would have gone in. That said, while I believe Chaim Bloom was the better fit, I’m much happier seeing the Mets taking a chance with Van Wagenen than bringing in more of an old-timer GM like Bob Melvin.

Plus, who better to navigate the choppy and always-changing waters of the baseball economy than a prominent agent? He’s not only experienced, but has a respected and terrific track record creating leverage and negotiating contracts for his players, with other teams and against other agents.

As a result, a cornerstone to being great at what he does for a living is knowing everyone in MLB, be it team owners, players or high-ranking executives from every team.

The new trend in MLB is to have strong baseball systems, research and analytics departments. Van Wagenen and his team at CAA often used advanced statistics to argue in favor of the requests being made for their clients. However, the research had an agenda and were often used to back into a value, not the other way around. The other thing is that most front offices have developed and are now using much of the same data.

The point I’m making is that, while I’m sure he has a strong grasp of math and statistics (considering he graduated from Stanford University), it’s very possible he will need a complete education in how and why they’re being used to help a baseball team win as opposed to using them so his agency and client can win…

The other thing to consider is that his past may create complications in the clubhouse (given the negative impact he may have had on players he didn’t represent), as well as making life trickier when dealing with other agents, such as Scott Boras and Casey Close, who will be sitting across from him in negotiations.